You know the phrase ‘the show must go on’? Well, curating is all about ‘the show must go up’. Here I am in Paris with the two-person CARAVAN team to install The Bridge exhibition in an ancient chapel inside the most historic church in Paris – Saint Germain des Pres. This is the church’s first foray into exhibiting art on this scale (47 original paintings). There are many limitations accompanying such a venue not the least of which is the prohibition to touch or attach anything to the walls. This calls for major creative problem solving.

I love curating but it is not nearly as glamorous as it sounds. Like most things worth doing, curating a show involves lots of hard work and you have to be prepared to be a jack-of-all-trades.

Four days later, the show is up and we are now taking care of the many small details in anticipation of the official VIP opening on February 8th. Some of the hung works are pictured below:

It’s been an incredibly rewarding, challenging and tiring time. And obviously I did not accomplish this gargantuan task alone – our team consisted of Paul-Gordon Chandler, founder of CARAVAN and CARAVAN’s Program and Development Associate, Claire Marie Pearman, both of whom worked tirelessly, fighting colds and physical exhaustion due to climbing up and down ladders and filling sandbags. It was a pleasure and an honor working with them! 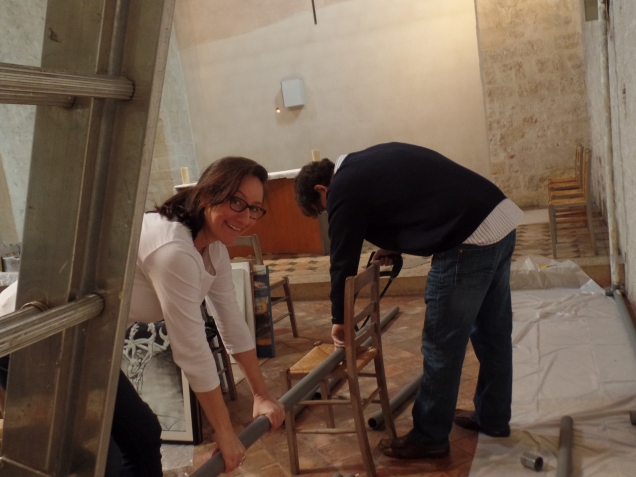 The exhibition will travel to Cairo, London, Rome, Barcelona and the United States.