One of the most prolific and remarkable 19th century Impressionist painters Gustave Caillebotte (1848-1894) flew under the radar for close to a hundred years. Unlike his famous peers (Manet, Monet, Degas, Renoir) Caillebotte did not offer his paintings for sale during his lifetime, and after his death, his oeuvre stayed in the bosom of the family for generations.

The National Gallery of Art in DC is currently exhibiting one of the largest collections of his work ever gathered under one roof. The opening lecture by curator and head of the department of French paintings, Mary Morton, touched upon a number of revelatory facts about Caillebotte’s work that led me to think that the artist may well be celebrating last week’s Supreme Court ruling on gay marriage, albeit from the grave.

Ms. Morton didn’t go as far as hypothesizing that Caillebotte may have been gay but she did point out his unconventional approach to popular subject matter. Lots of artists at the time were painting women at their ‘toilette’ but Caillebotte’s Man at his bath (above and below) definitely broke with convention.

Ms. Morton also pointed out that Caillebotte’s only interior cafe scene differed from those of his peers in that the central and seated figures are men. The standing figure is definitely checking out the other two guys.

Another very popular painting subject was the pleasurable boating party usually depicting couples enjoying a balmy afternoon on the water. Caillebotte’s painting seats the viewer right in the boat with a rather hunky male specimen.

Ms. Morton also spoke about the rise in prostitution – both male and female – that became endemic in the newly urbanized Paris following the city’s unprecedented Haussmanian renovation of the 1850’s. Caillebotte never married. And now I can’t help looking at his most famous painting ‘The Floor Scrapers’ (below) with a different eye. Those bare muscled torsos may have had as much of an appeal for Caillebotte as they do for this artist!

In fact, walking through the magnificent exhibition at the National Gallery, the rich paintings reflect a noticeable absence of women in the place of beautifully executed and composed paintings exuding male camaraderie. It matters not one iota to me what Caillebotte’s sexual orientation may have been but if indeed he were gay, the social mores of his day would have forced him into the closet. I therefore salute the Supreme Court for upholding laws that will hopefully allow people to live without fear of reprisal as a result of their choice of sexual partner.

The exhibition is on view in Washington DC through October 4, 2015. 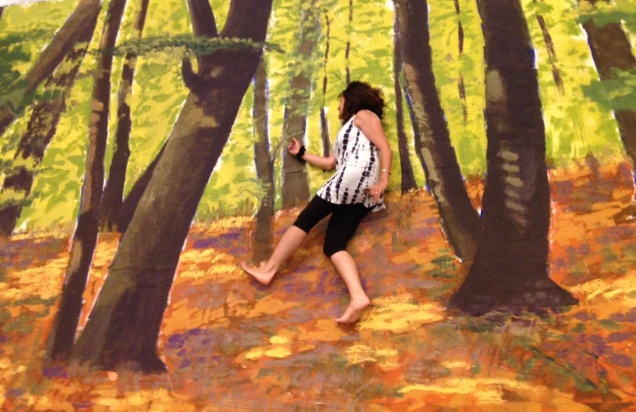 The size and scope of the art I create is unfortunately often dictated by the realities of my work space. I have a room-sized painting studio and am a member of the Alexandria Clay Cooperative where I produce my ceramics – but even there, space is a precious commodity. That’s why I had a blast last week helping artist Anton Merbaum paint a 36′ x 12′ scenic backdrop of a forest destined for the NVJCC’s annual dance recital The Red Slipper.

Painting to this scale is messy and physically demanding, but using rollers instead of fussing with paintbrushes and making grand gestural strokes was so liberating!

Painting the dappled foreground brought all my years of training as an impressionist painter back to life. I was privileged to have studied with the late painter Jean Henry while living in San Francisco decades ago.

Once the backdrop was hung it took on a life of its own. The results are extremely gratifying.

I was smitten with the experience and found out about a wonderful resource for artists thinking about getting into this line of work. Cobalt Studios in White Lake, NY offers two 3-week summer sessions covering the foundations of scenic design and painting. Definitely worth checking out.